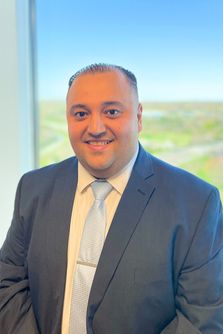 Amier Shenoda is an associate in the firm’s Litigation practice group. He has a wide range of experience involving complex commercial cases, including breach of contract, breach of fiduciary duty, fraud, partnership and shareholder disputes, business torts, employment, real estate and title litigation, and loan workout and restructuring matters. He regularly represents businesses, banks, lenders, private investors, and other financial institutions in several areas of law, including commercial real estate litigation, banking litigation, creditors’ rights, foreclosure, financial services, securities, regulatory compliance, among others.  Amier is active in all phases of litigation in the trial and appellate courts at the federal and state level. He is admitted to practice law in the States of New York, New Jersey, and Connecticut. He is also admitted to practice in the U.S. District Courts for the Eastern and Southern Districts of New York, the United States Bankruptcy Court for the Eastern and Southern Districts of New York, and the U.S. District Court of New Jersey.

Amier has been selected to the Super Lawyers New York Rising Stars list for two consecutive years (2020 and 2021) and he has been recognized by his peers for his outstanding work and commitment to the spirit of the legal profession. His knowledge of the law, professional work ethic, and advocacy on behalf of his clients allows him to stand out among other attorneys in the field. As a practitioner, Amier brings a unique understanding of the needs and priorities of his clients to his work. Prior to joining the firm, he worked for a national law firm in New York City, where he regularly defended claims against banks and financial institutions in matters involving state and federal banking and financial services laws. He has also worked directly with in-house counsels at a major financial institutions and investment banks to ensure regulatory compliance with federal and state banking and securities laws and has assisted those clients with examinations and inquiries from federal and state regulators.  He has also led a real estate transaction team that closed numerous loan workout and settlement agreements for over 10 years. This track record gives him exceptional skills as a litigator and a negotiator, with an unrivaled ability to understand the business needs of his clients because he has an insider’s perspective.