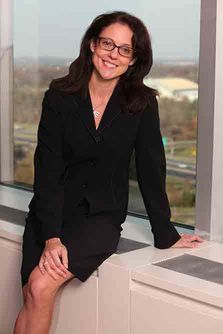 Mickee Hennessy is a Partner in the Firm’s Bankruptcy, Workout and Restructuring Department.  Mickee’s experience includes representation of secured and unsecured creditors and debtors in Chapters 7, 11 and 13 bankruptcy cases as well as commercial litigation on behalf of banking and financial institutions, health care companies, insurance companies and manufacturers in the fashion and textile industries.   Mickee has also served as counsel for a number of creditors’ committees.

She has represented a number of financial institutions in workout transactions and as creditors in bankruptcy cases, and has prosecuted and defended institutional and business entities in commercial litigations.  She has represented clients in a number of high profile bankruptcy cases, including In re Madoff Securities, In re Levitz Furnishings, Inc. et al., In re Worldcom, In re Enron Corp. et al., and In re Marvel Entertainment.

Mickee earned her law degree at Fordham University School of Law in 1995 where she was a member of the Dean’s List and an Editor of the Mentor Moot Court Program.  She received her Bachelor of Arts degree from the State University of New York at Potsdam, Crane School of Music in 1990, where she studied violin.

Mickee is past chair of the Bankruptcy Law Committee for the Nassau County Bar Association, and previously served as Vice President/ Legal Counsel for the Turnaround Management Association Long Island Chapter and on the Strategic Planning Committee for the United States Bankruptcy Court, Eastern District of New York.  In 2013, Mickee was named by Long Island Business News as one of the 50 Most Influential Women in Business.

Mickee has lectured on and moderated a number of panels on bankruptcy, ethics and mediation issues, and has published articles in the New York Law Journal and the Nassau Lawyer.  She is a registered mediator for the United States Bankruptcy Courts in the Southern, Northern and Eastern Districts of New York and has successfully resolved several contested matters through mediation.